In fact, Okoro gives us an image of beauty entangled with horror.

Black mannequin heads are laid with copper leaf and stuck onto metal rods at seemingly random angles. The display conjures images of beheadings and summons glimpses of Black bodies on the chopping block for sale through a storefront window. Yet what is striking about them are the wire and gem-laden headpieces resting like crowns upon them. The links cascade like hair, their weight literally and metaphorically carried by the heads. They are ostentatious in the most celebratory sense.

In a Zoom call Okoro spoke about the versatility of headpieces she started to make for herself. Since childhood, she has always used fashion as a mode of expression of the inner self that has the potential for layered meaning to its audience. “I love fashion, and lately I have been having urges to make something physical, to get deeper into wearable art,” she says.

“Burden of Respectability” is not her first time melding sculptural and fashion work. Previous shows, like her 2019 “Punk Noir” exhibition at the Carver Museum, have infused Afropunk styles onto black mannequins that gesture back to the artist herself. That trajectory is what Okoro calls self-reflexivity, or the examination of how exterior life and interior self are deeply intertwined, one always informing the other.

“Whatever I make is for myself first,” she told me when I asked her about her practice of self portraiture. “And when I do that, it naturally resonates with whoever else it is also for.”

Okoro titled her current show “Burden of Respectability” to reflect the concept of respectability politics, or a belief that marginalized people can be deemed respectable by their oppressors if they assimilate to the dominant culture. Too often, this belief generates a distaste toward cultures and behaviors that don’t assimilate to White normativity.

As a child, Okoro felt this burden deeply.

“I wanted so badly just to fit in and assimilate with what was acceptable,” she recalls. “Which is hard because I felt like I was sticking out like a sore thumb. I wanted to be invisible.”

One of the most prominent ways assimilation figures in the daily lives of Black women is hair. Certain hair types and styles have always been considered more respectable than others with a bias toward European hairstyles. As an artist, Okoro sets out to destroy that burden with the unmistakably Black decorative design of her hairpieces.

In a society that asks Black women to put their hair up, straighten it, and chemically damage it for the comfort of the white gaze, Okoro’s sculptures say no. They choose and demand to be seen as the beauty that they are. Decorative hairpieces are not a thing to hide, but a beautiful piece of culture to be celebrated.

Okoro envisions a representation of ostentatious beauty that not only helps her Black audience feel comfortable with who they are, but also lucky to come from a culture that has brought this sort of beauty into the world. Inspired by high-end department store displays in New York City, she dares to hold space in a window display for Black women to see themselves as valid in what could otherwise be considered “unrespectable” by white normative standards. They are self portraits, “but they’re also any Black person that can relate to that [burden] as well.”

Okoro upends the dominant art historical narrative. She is not in pursuit of the same question in every project, not looking to mastery as the achievement. Rather, with each work, opportunity, and season of her life, she uses art as a pursuit to the expansion of herself. She does not ask, “how can I perfect this piece (but) how can I multiply the tools I have gathered in my past to propel me into work I have never done before?”

Okoro doesn’t tether herself to a fixed mode of making. Her work in all of its variations of media and form is a pursuit of the best way to tell whatever story she wants. Growing up in Lubbock, the daughter of a Nigerian father and American mother, she journeyed the world through Ebony magazine layouts, Black fashion spreads, and LP covers and the songs that played on them.

“My grandma would get Ebony each month and they had a couple of pages dedicated to fashion,” Okoro recalls. “There were black models in New York and Paris and the clothes were so luxurious and detailed and that was my window outside of Lubbock.”

These now inform her approach to form. Okoro incorporates fashion, designs album covers, and above all, celebrates Blackness at the forefront of her content.

And she’s not finished with testing the limits of herself and her art. With each new project, Okoro breaks boundaries set by others, reminding her audience that her subject cannot be neatly encased by anyone’s standards but her own.

“I want my work to be accessible in different ways, more ingrained into other pieces of culture, other than just being on white walls,” she says. “I want to expand my reach, because when people find my work and they feel a connection and they get it, then I feel like it was for them as well.”

“Burden of Respectability” is on view at Dimension Gallery, 979 Springdale Road, through Dec. 6. The display is socially distant and can be visited at any time. 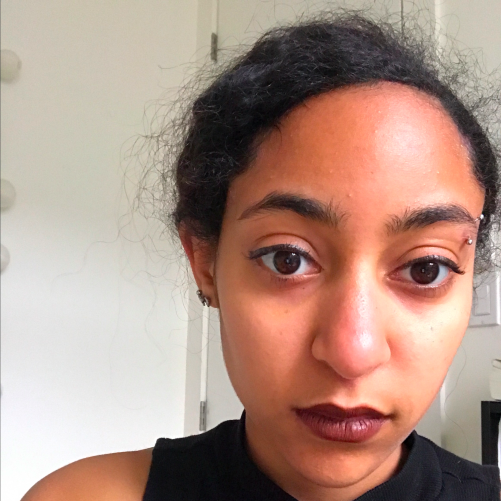