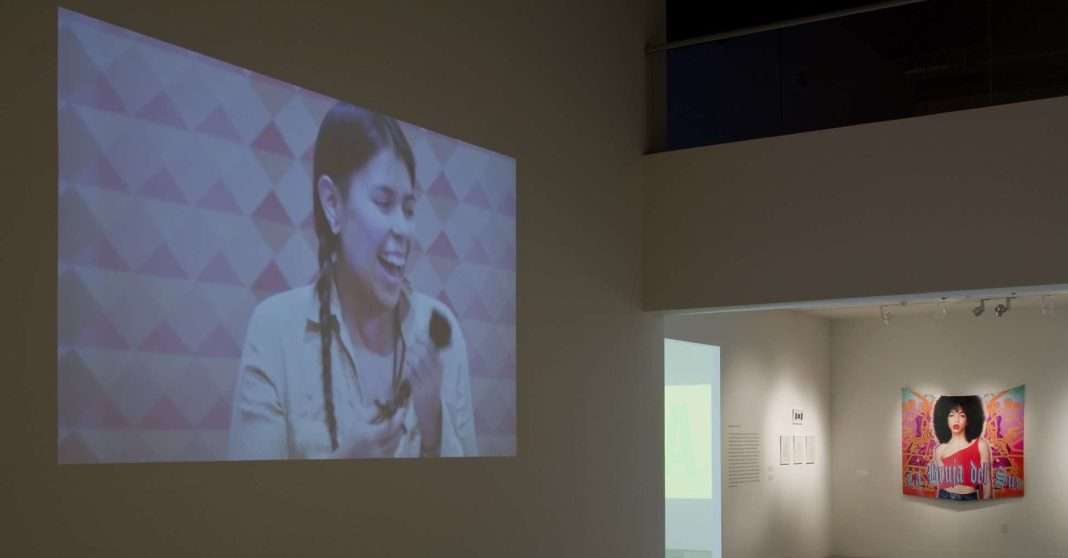 Saakred navigates cultural markers without hesitation, and with refreshing analysis.

The San-Antonio born performer, musician and visual artist moves fluidly between creative disciplines. When it comes to conceiving work and recounting lived experiences, Saakred both memorializes things that shaped them and creates visual solutions for what is missing. For Saakred, the earnest attempt at self-healing grew into a creative and conceptual platform for testing the limits of public vulnerability.

I first met them in 2017 at the start of summer. Since then, Saakred and I have spent a lot of time walking and talking in the barely walkable city of Austin, where I’ve been a witness to their unapologetic ambition in conversation and in practice.

Since Saakred’s departure from San Antonio, they’ve shared with me perspectives on personal resilience and on how to confront difficulties in forward-looking ways before even considering failure. Saakred’s first solo exhibition, “Sin Nombre, Sin Cuerpo” at the University of Texas Visual Art Center, curated by Christine Gwillim, proved a significant milestone for the artist.

“Looking back,” Saakred says, “I arrived (in Austin) with the intention to transition, advance my music career and figure out the art world.”

In the last three years Saakred has opened for Devendra Banhart at Austin’s Emo’s nightclub; held a week-long residency at MASS Gallery; self-released two EP’s titled “2025” (2016) and “Criminal” (2018); and performed at the Blanton Museum’s “Soundspace” program.

Earlier this year Saakred came full circle with inclusion in “Transamerica/n: Gender, Identity, Appearance Today,”  their first museum exhibition at the first museum they visited as a child, San Antonio’s McNay Art Museum. “La Reina del Valle,” Saakred’s painting of a transwoman as a lowrider beauty rendered on a Chevy Impala lowrider hood explores the construction of identity through appearance.

Saakred structures their life as both a subject and a medium.

At UT, “Sin Nombre, Sin Cuerpo” felt nothing like one of Saakred’s visceral performances. There was an absence of sound in the exhibition. Iconographic images replaced music and instead left traces of movement where the artist’s presence was remotely felt or implied.

Over the phone, however, I can hear Saakred’s voice echo against their footsteps as they circle the empty gallery. Describing conceptual differences between art and music, Saakred tells me: “I felt like I had something to prove as a musician — experimentally in ways that I continue to love, but visual art is something I want to hold close, the body of work in my exhibition feels like the reality of what I want to be doing.”

Such a personal realization suggests vulnerability and also strength — the artist claiming direction of their work. It is no surprise that the same careful technique in Saakred’s live performances extends to the art in the exhibition — the self-documentation in objects delicately laid out in vitrines, the colorful sartorial interventions that hang on the wall, and the video pieces.

The exhibition began with the video “Dead Skin.” Projected large-scale on the gallery wall, the looping three-minute video finds Saakred pushing in and out of gender performativity, a moment that, in retrospect, marks the beginning of their gender transition. We see Saakred cut off their long braids, a physical intervention on hair as a gender-coded characteristic — the artist’s actions, interrupted by laughter and a lasting smile, symbolic of a re-imagined version of themselves.

“At first the video was really me combatting the feelings of tokenization that I encountered in school,” Saakred clarifies. “The removal of my braids also evolved into a symbolic release and significant ‘fuck you’ to not finding space within certain ceremonies that I assumed I would be. The idea of your spirit being respected in certain indigenous rituals that I was surrounded by, for example, was not my reality.”

In the exhibition, Saakred filled a vitrine with empty bottles of testosterone arranged in a grid and titled it “Sin Cuerpo.” Pinned to a nearby wall were related ephemera including documents of the artist’s coming out, changing names, and even prescription records presented together as a series called “Sin Nombre.”

It’s an intimate gesture, assembling these items for exhibition. “These objects aren’t there to shock,” Saakred tells me, “but to question the complexity of how these little glass bottles do in-fact make me more of a man? My name is cut out of the encasing as well, signaling the difficulties I experienced trying to get these prescriptions.”

Saakred showed interest in the formal aspects of making long before they started making music. In a playful yet decisive manner, they recount to me experiences of growing up in public housing, where drawing at the kitchen table was a daily activity while their mother studied for college.

“I developed a language of drawing as a way of coping with the chaos in the world around me,” Saakred says. “I’m reminded of the architecture of certain spaces, how drawing was a way to find refuge in a way.”

Three of those untitled drawings from 1999 and 2000 are installed alongside what were perhaps the centerpieces of the exhibition, three car hoods. Now almost 20 years old, the sketches recreate stereotypical symbols of Latinidad: a man with a “bigote” paired with a small car, two Meso-American deities and a mask.

To Saakred, these choreographies of Chicano manhood have always been familiar.

“I’ve been doing this since I was ten years old. This is a formula built upon twenty years of experience growing up in the West Side (of San Antonio) coming into my manhood, affected by the symbols of Mexicano identity.”

Detailing their version of low-rider culture, Saakred references encountering a Judy Chicago car hood at London’s Tate Modern while in the process of writing a last minute grant proposal. In moments of constraint or pressure, the artist’s creativity abounds.

The trio of paintings “La Bruja del Sur,” “Like a Thunderbird” and “La Reina del Valle” can be read as a contemporary alternative to a triptych. The term, traditionally referring to painting or relief-carved panels, is applied here to a hallmark of queer aesthetics that replace hetergenous Chicano visuals. In particular, “La Reina del Valle” captures La Morena, an Austin-based hairstylist, MUA and DJ and it is Saakred’s tribute to a significant trans Latina in their community of artists.

While an undergraduate at Trinity University, Saakred spent six months studying in Ireland. It marked the first time the artist had access to a studio. And there are noticeable differences in the production of their work from that point forward, Saakred acknowledges. Before then their practice had been inventively self-taught, both musically and visually.

Thinking about the current cultural emphasis on, and costliness of, graduate MFA art programs, I ask about access and technique, to which Saakred responds: “A mastery of mediums for me is not enough nor is it particularly necessary for getting to a place of success.”

I’m reminded of seeing Saakred carefully stretch a make-shift canvas, not in a sleek studio but in the most open space available to them — in 95-degree heat outside in their backyard. That same canvas, now filled with evocative scattered lines and references to San Antonio, hung at the debut of their fashion collection at the multidisciplinary art space Nepantla in Austin earlier this summer, indistinguishable from the condition of the one I saw two days prior.

“Adrenaline is a real motivator,” Saakred insists.“But it also relates to the ways that escapism for me relieves deep suffering, and it becomes obvious when I start to see things (literally and figuratively) fall apart.”

There are often romantic notions about performance that often involve bodies and provocation, however, here there is no shame or respectability on view to provoke an audience. In a trio of videos — “Cut Meat,” “Bandage 1” and “Bandage 2” — Saakred introduces frameworks from which to navigate their experience of a corporeal reality.

Whether it be through documents, clothing, or the medical remnants of Saakred’s transition, the artist’s work transforms void and routine into something characteristic of celebration. Throughout our series of phone calls I’m reminded how clearly Saakred communicates their goals.

“Spending time in galleries and working at a museum,” they recount, “I was paying a lot of attention to all of the conversations had, even how handlers would pack the work up in a huge sort way to learn another layer of language.” Now from an opposite perspective, “a real feeling of validation,” they tell me, “comes from seeing how art handlers discuss and make comments about my work, people who I know have had extensive contact with other artists.”

In this moment I’m aware of the environment they’ve successfully created to support opportunity and development, not only of their work but of an audience’s awareness.

“I am striving to see my art practice as work, so that I can differentiate,” Saakred adds. “Art for art’s sake to me is an unfamiliar experience. I want my contributions to be something that both myself and other people believe in, despite how subjective the reception of my work is.”

Fashion plays a central role in many of the performative aspects of Saakred’s work. Again over the phone, I ask what they are currently wearing. A thin white tank top, wide-leg khaki pants, a black leather belt to match their black work boots and a slightly oversized tweed blazer jacket, Saakred tells me.

In the exhibition, the clothing art works “Muy Criminal”, “Criminal Panuelo” and “Fake News, Not So Fake News” use everyday work wear to experiment with a new Tejano aesthetic. The boxy silhouettes of durable clothes are unconventionally collaged with rhinestones, exaggerated lettering, embroidery or handwritten words.

“Certain parts of the series are more conceptual,” Saakred states, mentioning the orange pants they’ve lately referred to as “prison pants.” In more subtle ways, the “Fake News, Not So Fake News” pants also reappropriate corporate logos to ask questions about capitalist assumptions and discrepancies in contemporary media culture. In every which way that Saakred grounds their relationship to clothes, they assert that it’s all undoubtedly informed by the fact that they’ve grown up as a brown kid in Texas.

“My work overall is really informed by an aesthetic of ‘rasquachismo,” Saakred says using a term, of Nahuatl origin — “rasquache” — that describes an attitude that is lower class or in bad taste. In the context of Saakred’s garment work, however, any negativity is displaced by inimitable fashion flare.

Saakred’s relationship to heritage reminds me how ethnicity connects to us the past. Their grandfather is from Monterrey in the northern Mexico state of Nuevo Leon and their grandmother from Villa del Carmen in Sinaloa on the Pacific coast. Saakred’s mother is a second-generation American.

“All of these things relate like poetry,” they explain. “To me, self-discovery exists in a way to explore a deeper epigenetic memory. There are connections that you can’t piece together until you find out very concrete information about your lineage. But then I’ll spend time with my nephew and see him behave in ways that I do and come to a different conclusion. Making work is a way to get to that hidden information, a kind of indigenous identity that is disconnected from the surface and feels impossible to pin-point. I make art about it to find a language that will transcend its complexity.” 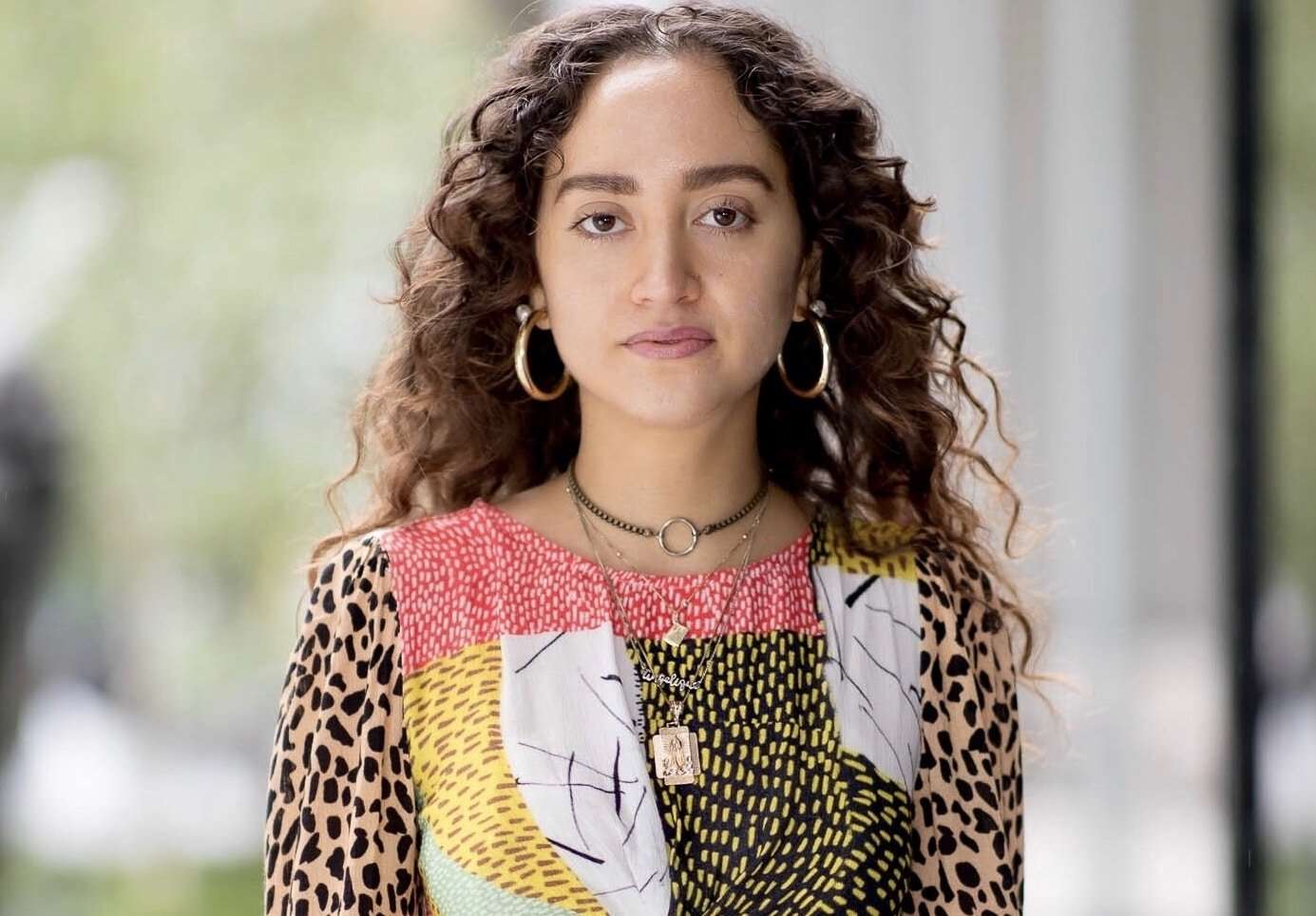 Angelique Rosales Salgado
Angelique is a Mexican-born Curatorial Fellow at the Studio Museum in Harlem and MoMA. She holds a BA in Art History from the University of Texas at Austin with minors in Museum Studies, French and Women’s & Gender Studies.