In 1787, the Founding Fathers wrote into the U.S. Constitution that federal judges should be appointed for life. Say, for a moment, there exists a time machine capable of transporting a recent law school graduate back to Philadelphia just before the Framers finalized their signatures. Say this law school graduate places a crystal ball on the table and walks out. The crystal ball reveals two centuries worth of cruel, corrupt, and abusive action carried out by powerful men, wearing black robes. Footage of Anita Hill’s testimony in 1991 plays. Footage of Christine Blasey Ford’s testimony in 2018 plays.

Upon seeing this future United States, where unfit judges rule like crazed kings, would the Framers have felt compelled, to step back, and revise a few things? It’s difficult to predict, even for legal scholars, what a room full of white men intended. What’s clear is that unchecked power runs a predictable course, straining democracy like a disease.

Investigative journalist Lise Olsen’s exposé “Code of Silence: Sexual Misconduct by Federal Judges, the Secret System that Protects Them, and the Women Who Blew the Whistle” (Beacon, 2021) is a brilliant work of meticulous reporting. Olsen spent over a decade, combing court documents and conducting interviews in order to uncover why federal judges — who harass, abuse, and assault their employees — are seemingly above the law. In a style that is clear, focused, and utterly engrossing, Olsen structures the book so that readers see, as she eventually saw, each intricate strand that made up a vast web of secrecy — one constructed to protect abusive judges and leave federal employees trapped, vulnerable prey.

The storyline follows Cathy McBroom, a top assistant and case manager for a Galveston-based U.S. District Judge Samuel Bristow Kent. Clerks of federal judges take an oath to keep the court’s secrets, and, for a decade, McBroom kept quiet that she had been sexually harassed and assaulted by Judge Kent. When McBroom later came forward to make a formal complaint (a process she wasn’t aware even existed) there was a slim chance there’d be any real consequences for Kent. After a bit of investigative digging, Olsen reveals why:

I learned about a top secret federal judicial disciplinary system that allows judges nationwide to privately review complaints against their peers. That system seemed designed to protect the reputation of federal judges rather than to provide essential information to the public about judicial rogues.

With judges covering the misdeeds of other judges, sexual harassment claims collected dust. Olsen writes, “year after year, 97 to 98 percent of complaints filed against federal judges nationwide were dismissed without any kind of formal investigation.”

In 2007, Olsen published an investigative story titled “How Far Did This Federal Judge Go?” for the Houston Chronicle, and that story had legs. Details of Kent’s predatory behavior were made public — besides McBroom, two other women steeped forward. Kent made sexual jokes, propositioned his victims, kissed and groped them. Kent tried to force McBroom to have oral sex, and physically attacked her. Despite fears of retaliation, McBroom allowed her name to be published. Since her complaint had gone nowhere, Olsen’s story lit a fire that prompted three members of Congress to call for a new investigation and a criminal probe against Kent.

Employees who go up against federal judges for sexual harassment fear retaliation, demotion, transfer, termination, the loss of income and benefits, the lack of a recommendation for another position, and worsening treatment. They fear losing careers they worked hard to attain. Judges on the other hand know they are protected with lifetime job security. Olsen notes that Kent displayed “robe-itis,” with a pattern of making pronouncements such as “I am the government” or “It’s good to be king.” Meanwhile, McBroom’s mental health was greatly impacted and her marriage collapsed. 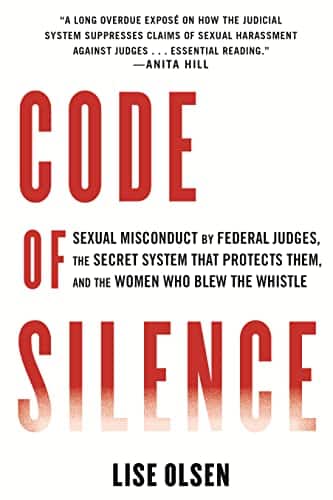 Code of Silence presents page after page of shocking information. (The margins of my book are littered with WTFs, wows and double exclamation marks.) Olsen writes that “Kent was only one of seven judges to receive any formal disciplinary action in response to more than six thousand complaints filed from 1999-2009.” Additionally, in the rare case that a judge is held accountable, they receive what amounts to a paid vacation, mandatory counseling, and free legal representation. Kent, for instance, got four months of paid leave totaling $55,000, counseling, and kept his job on the bench. In an utterly gut-wrenching twist, part of Kent’s “punishment” was to be transferred from Galveston to Houston to the same building where McBroom was now employed in a lesser paid position.

In 2009, the House Judiciary Committee convened to consider impeaching Kent. Another long-time employee of Kent’s came forward and described to the FBI five years of sexual abuse. Oslen reveals that unless Kent was both impeached and removed, he would remain a federal judge and collect $174,000 annually, even with a felony conviction. The House Judiciary Committee voted to impeach Kent. Olsen writes:

For the first time in U.S. history, a federal judge had been impeached on the basis of evidence that he’d abused his power in order to commit sexual abuse and assault and had lied to federal judges and agents to hide his crimes.

Olsen’s “Code of Silence” is currently one of the most important books on my bookshelf. For the first time since watching Blasey Ford’s testimony, I felt as though I understood how we, as a nation, got here — to a place where the court system protects abusers. In a case-clogged judicial system that moves agonizingly slow, Brett Kavanaugh won a seat on the Supreme Court nine days after Blasey Ford spoke to the nation about how Kavanaugh had attempted to rape her when they both were teens. Olsen writes there were “eighty-three misconduct complaints against Kavanaugh.” As a newly appointed Supreme Court justice, all complaints against him were dismissed — Olsen adds that “Supreme Court justices are immune from both investigation and disciplinary action by their peers.”

After finishing “Code of Silence,” I pulled up a YouTube video of Anita Hill’s testimony, which took place in front of an all-male U.S. Senate. She sits directly across from now President Joe Biden. I watch the faces of those in the audience. Seated behind the senators, a white woman turns her head and yawns. Once the video ends, the opening statement of Clarence Thomas loads. After Biden states that the committees’ handling of the charges has been criticized, he then goes on to say that the committee “emphatically” takes sexual harassment seriously. I can’t help but notice that the woman sitting behind him appears to role her eyes. It’s a small moment, but it speaks loud and clear.