Austin’s Most Maligned Public Artwork to Get a Makeover

Those curious rectangular blank blue signs along the Lamar Bridge Underpass? They're a work of public art, and they're about to receive a creative intervention.

It’s been fodder for jokes, puzzlements and plenty of chatter.

Now, perhaps the most maligned public artwork in Austin is about to get temporary makeover.

“Moments,” a city-commissioned public artwork comprised of blue reflective street signs placed at intervals on the walls of the Lamar Bridge Underpass, will be transformed, at least temporarily, by Austin artist Laurie Frick.

The effort is part of a pilot project by the city of Austin’s TEMPO program of temporary public art. The “TEMPO Refresh” initiative, as it’s called, is meant to address — or re-address — existing works of public art with renewed sensibilities, particularly with more sensitivity to cultural identity and the environment.

City cultural officials, however, said part of the reason in choosing “Moments” for the first “TEMPO Refresh” was because it’s “one of the most discussed artworks in the city’s (public art) collection.”

To be sure, “Moments” has garnered far more than its share of disparaging chatter over the years. Whether on Reddit threads or the usual blasts from local journalists desperate for a punchline, (see the Austin American-Statesman’s  “Some regard blue signs as royal eyesore.“), “Moments” has had plenty of moments.

In fact, Frick’s upcoming artistic intervention won’t be the first. In 2010, then Austin resident Magda Sayeg — who claims to have “invented” yarn bombing (she did not) — covered the blue signs with knit graffiti in a media-friendly stunt.

At the time it was installed in 2003, architect Carl Trominski — then an emerging professional working on his first public art commission — described the blue panels as visual markers that punctuate the movement of travelling in a car beneath the railroad and street bridges where Lamar Boulevard dips below grade.

Importantly, Trominski’s blue panels were originally supposed to be augmented by blue lighting under the bridge and by underpass walls painted blue and green. But additional funds from the railroad authorities never materialized, leaving Trominski’s blue signs all on their own. 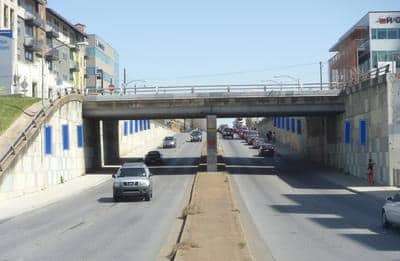 Trominski is supportive of the current intervention.

“I am totally open to a temporary artwork intervention for ‘Moments,'”  he said in the city’s press release. “This project was a great opportunity for me at the time and I’m happy that it can continue to provide opportunity to others today.”

Frick makes a solid choice for the city’s commission — perhaps because she is the rare admirer of “Moments.”

“I’ve lived a few blocks from ‘Moments’ since 2003 when it was installed, and I’ve always loved it,” she said.

“I’ve always thought the angle of the signs made that tunnel feel like a fluid dynamics experiment, where you and your car were being propelled through the gateway, and the signs were like oars in the water or indicators of flow. It made it seem you were the art, not just the observer.”

Frick explores data in her art practice, mining information from her own behaviors (she self-tracks, gathering everything from how many steps she takes to her sleep patterns) as well as data of other societal patterns. Frick translates data into differently colored visual bits (pigmented wood blocks, powder coated steel), arranging the bits into intriguing and enigmatic displays, either as discrete artworks or site-specific installations.

Frick’s “Moments” project will involve painting the walls of the Lamar Bridge Underpass in vibrant colors, her mural a visual interpretation of data collected on why visitors come to Austin and what they do while they’re visiting the city.

“I focused on how data could tell a story, and gathered visitor data and the most Instagrammed murals that visitors to Austin post,” Frick said. “Over 25 million visitors come to Austin every year — a staggering number. But the things they like and do are the same things we love about Austin: music and nightlife, food, friends, outdoors, shopping, events.”

Frick will cover the walls with painted dripping stripes of visitor data. One wall will represent the reasons they come to Austin and the opposite wall, the activities once they arrive.

And for the 16 blue signs, Frick has devised fabric covers in patterns that match colors found Austin’s favorite murals, like the much-Instagrammed “I love you so much” on South Congress Avenue or Daniel Johnston’s  “Hi, how are you?” frog mural.

Works is scheduled to be completed by Sept 30 — just in time for the first weekend of Austin City Limits Festival, and its 50,000 visitors.

Frick’s additions to “Moments” will be up until late summer 2019.

The Line-up: A dozen artists to see on the Austin Studio Tour

The Line-up: Women artists to see on the Austin Studio Tour