Austin School is Bestowed With A New Mural 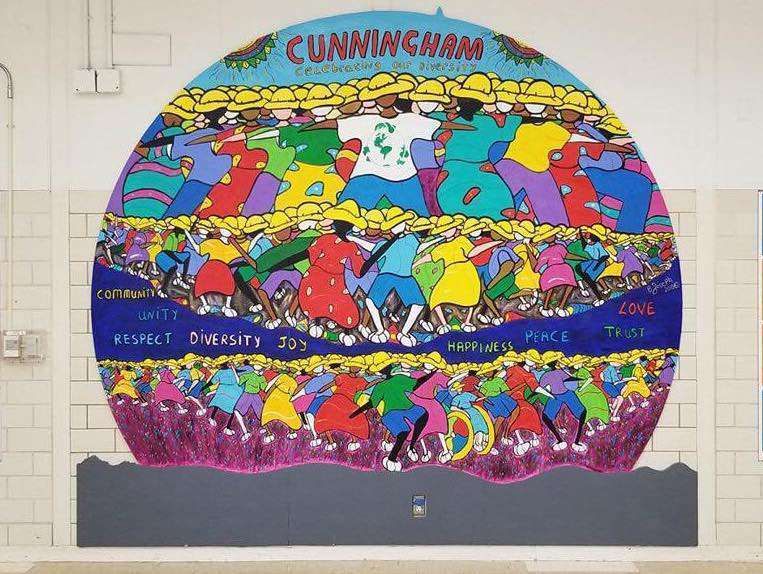 In the cafeteria of Cunningham Elementary School in South Austin students used to be greeted by a large, round mural featuring the head of their mascot – a cobra – rising over the planet Earth. Now they will see a less ominous mural created by Brian “Bydeeman” Joseph.

Contracted by Maureen Haskell, past president of the Cunningham PTA, and Amy Lloyd, the school’s principal (now retired), the Austin artist has transformed the large wooden disk into a joyful triptych in bright acrylic colors.

Joseph explains in a recent interview, “When I came here and saw the globe that was already here, I thought I gotta do this. I taste these things, I feel I could eat it.  It’s a good, good feeling.”

The new mural, unveiled in November 2017, is a celebration of humanity. In the bottom third Joseph places the smallest children who “are dancing and enjoying each other.”

The larger children in the middle section have their arms about each other’s shoulders with a feeling of camaraderie, unity, and determination.

The top third features the adults, “who are the teachers, the staff, the cafeteria workers, the custodians. Everyone is included.”The artist poignantly explains the adults’ outstretched arms: “The adults are spreading their wings and are saying, ‘We got you. We have you covered. Once you come into this building, we’re gonna make sure that you’re OK. You come here to learn and also to be protected and have a good education in life.’”

The entire range of human skin tones is represented by Joseph “to show diversity because that’s the real world.  My concept is that there is only one race. Within that race there are different colors, different ethnicities, and different cultures. Everything is different but that’s what makes it interesting and enjoyable. We have to celebrate that.”

There is a powerful visual rhythm to the three lines of people. The viewer can imagine the joyful rhythms and energy of Caribbean carnivals and hear the music that Joseph often listens to while painting: calypso, reggae, and soca from his island birthplace, Trinidad.

Tying all the figures together, no matter their age, is the color yellow.

“In my art they always wear yellow hats, the Bydee people do. Yellow is their favorite color, but it’s also for unity. They wear different colors and different types of clothes, but the one thing they have in common, they love their yellow hats.”

All the other primary colors are in full display since Joseph purposely employs “bright colors to make you smile and warm colors to befriend you.” Even the sun, split into two halves, is not only yellow, but also blue, green, and reddish brown.

An art professor once arrogantly proclaimed to Joseph: “You don’t know anything about colors. You need to learn about colors.”

“He was saying which color goes with which color,” Joseph says. “I don’t think like that. I just put colors. I didn’t take it as an insult …  took it that he was trying to tell me what he would do.”

With a nod to the tradition of the Cunningham Cobras, the mural has a centrally placed adult wearing a white t-shirt emblazoned with a green and white globe featuring the Western hemisphere surmounted by the head of a cobra.

Another significant figure in the mural is a young girl in a blue dress seated in a chair with big, yellow wheels. Putting her in the foreground with the dancing children shows Jospeh’s emphasis on inclusivity.

His positive philosophy of life is contained in words that he prominently places around the mural: “It’s all about community and unity, respect and diversity, joy and happiness and peace and trust and love. That’s universal, but this is also the message of the school. The school is very diverse, and they want to celebrate their diversity.”

Joseph exemplifies diversity in his own life and path to becoming an artist. Born in Trinidad, Joseph moved to Brooklyn at the age of 17 to live with his father. There he attended George Wingate High School. His greatest culture shocks were the subways, students cutting classes or cursing teachers without punishment, — and freezing temperatures on a sunshiny day.

After high school, Joseph attended John Jay College for two years and then transferred to Tougaloo College in Mississippi. The historically Black institution had a good reputation for pre-med/pre-dental studies. “That was a big adjustment coming from New York to slow Mississippi. I took a class in anatomy and went to see a cadaver and I almost fainted. So I changed majors from dentistry to sociology and anthropology.”

During a study-abroad stint in Ghana, Joseph discovered the beauty and power of African art. After receiving his bachelor’s degree and working a while as a recruiter for Tougaloo, he moved to San Antonio to acquire an M.A. in Urban Studies at Trinity University.

By 1984 Joseph was living and working in Austin, But the significant date is September 1986, which brought a major shift in his life.

“I was a city employee. I wasn’t happy with my job,” he explains. I reached a point where I said, ‘I’m going to control my own destiny.’ Because I worked at Palmer Auditorium at the time, there were a lot of art shows, craft shows, and I’d walk around and watch the artists and they all seemed to be happy, free.  And I thought, ‘That’s what I’m gonna do.’”

He went home and created his first painting — a man sitting on a seashell. He enigmatically titled it “The Bydeeman Is Coming.”

How did Joseph just sit down and paint? “I realized with art that if you can follow the lines, you can do it. I can look at a painting and figure out how they put it together. I could always do that. I could see it. I recognized that was what I was doing without even thinking.”

Joseph created five paintings and got a booth at an arts and craft show at Palmer Auditorium (where the Long Center is now). With his five small paintings enclosed in store-bought frames, Joseph explained to people inquiring about the lack of facial features on his figures, “These are the Bydee people. They have no faces because you don’t need to be good looking to be happy.”

He has continued his signature “faceless” style right up to the present and along the way created a meaning for the “Bydee people” — “Bringing You Delightful Entertaining Experiences.”

With his initial foray into the art world, Joseph was ecstatic that he sold one painting for $35 even though the booth cost $100. He remembers, “You would think I was a millionaire.”

More paintings, more shows, his own gallery at 412 E. Sixth Street, and more sales. No one was more surprised than Joseph’s father by this major shift in his son’s life work. “When I started painting and he saw my work, he said, ‘Who told you to do that?’ I said, ‘Nobody.’ ‘Somebody had to tell you.’ ‘No, dad.’ The joke was he would always try to send me money because he thought starving artist.”

On the other hand, Joseph does credit his father with teaching him business skills back in Trinidad. After his father left for New York City, Joseph continued running the family tailor shop for three years until leaving the island himself. Years later, after seeing how successful Joseph was as an artist and a businessman, his father proclaimed, “You’re a hell of a fellow.”

Following the inevitable trajectory from a 20th-century brick-and-mortar gallery to the 21st century digital marketplace, Joseph now sells his work online, including lots of t-shirts featuring the Bydee people.

And then there are the murals. The Cunningham Elementary mural is the most recent in a long line of murals predominantly in schools. “I’ve done many towns across Texas: Dallas, Del Valle, Bastrop, several Austin schools —Kealing, Blackshear, Oak Springs – and Round Rock (Live Oak Elementary),” Joseph says.

One school principal in the Texas Panhandle explained to Joseph why he had invited him back to town to create a second mural. “When you come in to do a mural, do you think that’s the end of it? We take this mural and the kids write stories about it … their creativity comes out. They write the most beautiful stories where they see themselves in this art.”

Joseph’s talents have also spread to college campuses. For a mural at Auburn University in Alabama, Joseph made sure that all the Bydee people were linked together with the sinuous tail of the school mascot, a tiger.

It is such connectivity among people that Joseph promotes in his life and art work. And his most recent work, the Cunningham mural, perfectly embodies his world-view — the idealistic beauty and joy of the Bydee world.

“It has a round, global feeling, and I wanted to make sure that I presented a diverse world with adults and children so that everyone could enjoy each other and enjoy just being in a place that is almost like a utopia. I think when kids look at this every day, it will give them some kind of an uplifted feeling.”