The exhibition “small acts,” at grayDUCK gallery, weaves together recent works from four Austin artists: Betelhem Makonnen, Christina Coleman, Deborah Roberts, and Tammie Rubin. It’s an examination of how their practices prompt changes in themselves, in others, and in the worlds around them. I say ‘worlds’ because there are many to explore here, and diverse ways that these artists approach the task.

Together, these four artists highlight the potential for art to expose a constellation of visual narratives grounded in Black experiences, hopes, and understandings of time. These visual narratives sometimes collide in the physical arrangement of the exhibition. For example, Coleman’s series of photographic studies of enlarged, acrid-looking orange pennies sit across from one of Roberts’s intimate figural collages commemorating Black girlhood. It’s an unexpected conflation that feels both irreverent and productive.

Roberts’s work challenges the consumption of Black stereotypes alongside Coleman’s everyday symbols of capitalist exchange. The pair belong to one another like puzzle pieces from different boxes that curve together in a perfect match. These interactions between works are small acts unto themselves, highlighting the very different practices on view alongside the shared goals of the artists.

The leading act in this collection of small acts come from Coleman, whose circular bodies of packed synthetic hair relay a deeply profound yet lighthearted approach to Black cultural experiences. The show begins with her larger-than-life “Black Hole (Particle Terrain)” (2020), which greets viewers in the gallery entryway. Its surface ripples with tightly packed synthetic braiding hair across an undulating ground. The massive otherworldly body juts out into the viewer’s space, but its visual similarities to the texture of an Oreo cookie (more directly referenced in “Lunar Phases” (2021)) bring the work down to earth. This balance between the banality of everyday objects and the immensity of other dimensions is indicative of Coleman’s offerings for “small acts.”

Roberts’ contributions to the exhibition are small in number, but they pack a metaphorical punch. “Rosa Series” (2018) is a collage of patterns and figural elements sourced from popular media, layered together in the figural representation of a young Black girl. The artist’s earlier work “MisEducation of Mimi #190” (2014) stares back from across the gallery space. Represented through layers of collaged body parts and fabrics printed on paper, Roberts tangles and untangles her figures from the societal demands they will almost certainly face. She presents an unfaltering look at the pressures surrounding Black girlhood.

Makonnen’s “untitled (a flag to make time for joy…yes joy)” (2011-2021) is a study in temporal and spatial perceptions. The video work opens with a slideshow of pictures — potentially Makonnen’s family — before cutting to the artist on a beach, waving a hand-made flag that she describes as “a flag for all of us that are porous.” The object she slowly waves is less a flag than a series of voids that complement Makonnen’s words: pores in a symbol that buckles under its own weight and the wind. Yet Makonnen continues to adjust the flag again and again for the remainder of the video.

The artist’s languid movements and relaxed expression reflect a perceptual break between her repeated small acts and the potential joy in the work’s title. How long must she keep up this task? The video caption indicates that it was undertaken over the course of ten years, highlighting Makonnen’s extended approach to time. “untitled (a flag to make time for joy…yes joy)” is an example of just how powerful a collection of small acts can become if given the opportunity.

Surrounding Makonnen’s video are a constellation of ceramic works comprising two major series by Rubin. Her “Always & Forever (ever, ever) Nos. 8-10” (2021) series has gained even more immediacy in recent years, and Rubin’s new offerings to this formidable body of work are captivating in color, form, and meaning. 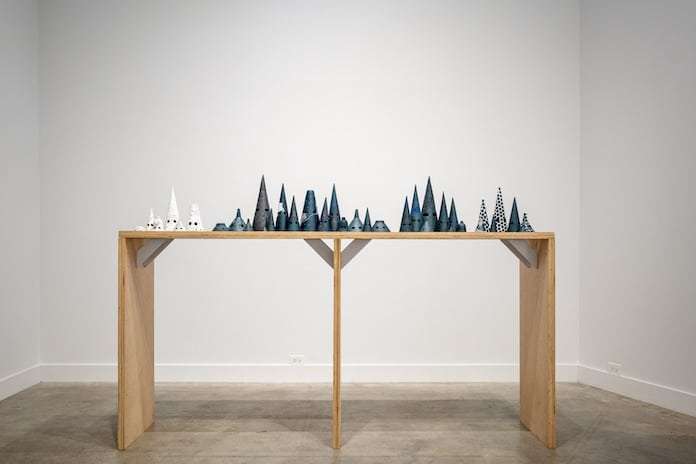 Grouped together on a long platform, the conical ceramic bodies evoke a landscape of cultural meanings: Ku Klux Klan hoods, hearing devices, dunce caps, and more. They are both familiar and strange. Their beauty lies in the intricate patterns detailed across their surfaces, representing geographic and political configurations of rivers, counties, states, a nation. Each cone is an entanglement of stories and peoples.

Coleman, Roberts, Makonnen, and Rubin visualize an ensemble of ways to approach macro issues with micro moments. “small acts” is the chrysalis of this thinking, creating, and responding to the conditions of their lives. Though their reference points may seem disparate, the works in small acts take on a more interconnected significance as they orbit one another.

I visited “small acts” on a Saturday afternoon with two other groups present. One of these groups — seemingly out for a day of exploring Austin’s Eastside — stayed less than five minutes before leaving. They appeared confounded by the works on view and did not make it further than the gallery’s entryway. This small act felt indicative of the ways that many Austin arts consumers choose to engage with the work of Black artists: that is, very little or not at all.

It is not hyperbole to say that there is an astounding lack of support for Black artists in this city, and the country at large. That’s why an exhibition like small acts is so important. It presents a splintered, multi-faceted, insightful view of four artists navigating a white-washed art market, without reducing them to one facet of their practices. Coleman, Roberts, Makonnen, and Rubin are bound in their conviction that this reality and other racial disparities can change.

As for the other group of guests in the gallery, they stayed for an extended period of time, ruminating over each individual artwork. Their quietude was broken only by ambient sounds from the gallery. This level of observation is what “small acts” begs of its viewers; that, and a little imagination.

Kaila Schedeen
Kaila Schedeen is an art historian, curator, writer, collaborator, and creative thinker. She is currently a PhD Candidate in Art History at the University of Texas at Austin.