Looking to liner notes to pen a collection of stories, "Death to the Bullshit Artists of South Texas," about musicians who never make it 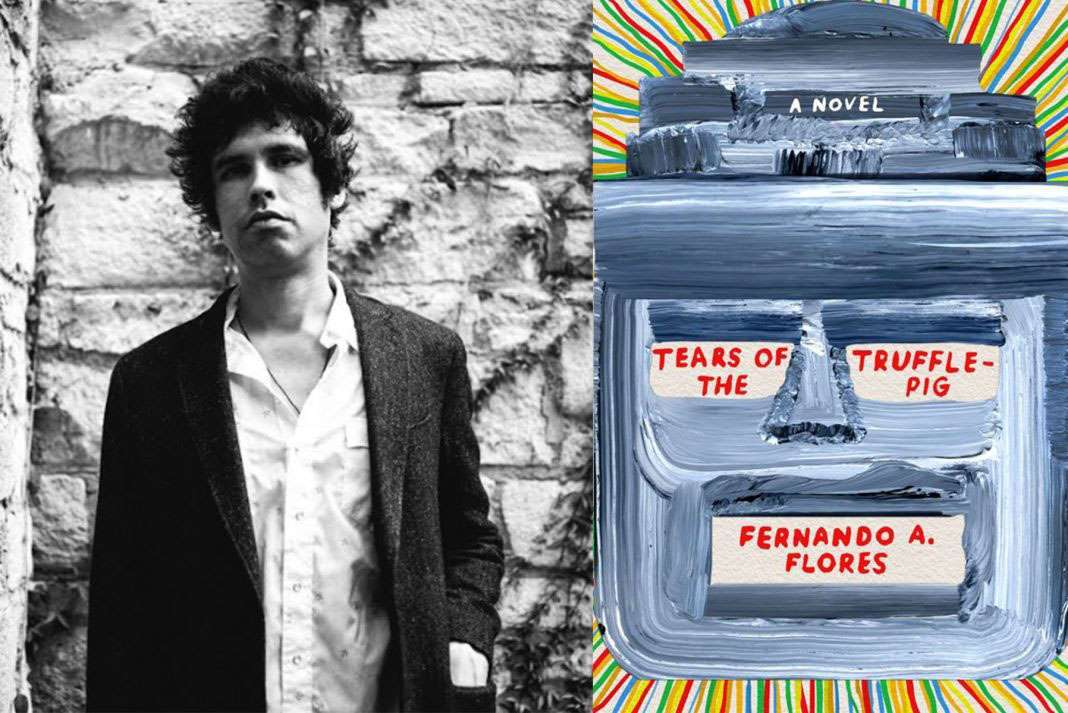 Fernando A. Flores first book, the short story collection “Death to the Bullshit Artists of South Texas,” is a kaleidoscopic journey through the lives of musicians on the margins — people who may have made no mark but still bottled inspiration and made art. The book feels as if these fictional characters needed a chronicler, and the reader is all the richer for it. A relative newcomer to the Texas literary scene, Flores’  work has been published in American Short Fiction, Huizache, Bat City Review, New Border Voices: An Anthology and other publications, and has received the 2014 literary award from the Alfredo Cisneros Del Moral Foundation. His debut novel, “Tears of the Trufflepig,” is due in May 2019 from MacMillian.

I met with Flores on a rainy autumn evening at Spiderhouse Cafe to talk about his new book, inspiration, poetry, and punk rock.

Nathan Singleton: First off, I love the book — very particular style, and as I was reading it, I was looking for influences. Leonora Carrington came to mind, and Roberto Bolaño as well — I thought perhaps they were in there somewhere… am I right? Are there any others?

Fernando A. Flores: Perhaps… I lived without the internet for a long time, and around 2009 I got my own place, got a computer, and I started reading Wikipedia for the first time. And so the stories are influenced by the pacing of both liner notes in music albums and Wikipedia articles. I really like the condensation of liner notes, how they’re able to encapsulate not only the artist, but this moment in time when they recorded these records. And I thought I could do the same treatment, in this particular kind of style, to artists who achieved some kind of greatness but never really broke out, like somebody like Link Wray or someone who actually broke out and there’s a history attached to.

NS: Right, right…Yeah that’s interesting — I haven’t dug into it, but maybe you have, but it’s kind of like in Bolaño’s “Nazi Literature in the Americas” and I read somewhere that Bolaño may have gotten that from Marcel Schwob —

FF: Yeah yeah, totally. When I was working on these stories, I was working on two other projects that I was taking more seriously, so whenever I wanted to break free from the constraints of those projects I just wrote these stories. I had a blast writing them, and I really didn’t know what I was doing but when I had like four or five of them, I started to kind of really look for something similar, so I thought, “What’s like a fake encyclopedia or something?”, and I discovered this one guy, Juan Rodolfo Wilcock. He was from Argentina, and he wrote this book called “The Temple of The Iconoclasts,” have you heard of it?

FF: It’s a collection of short stories about mad scientists that create weird machines, it’s totally insane. I already had almost all of these stories finished by the time I discovered Wilcock, but it was just interesting to me to find a parallel to what I was trying to achieve.

NS: I read the stories in chronological order, which you don’t necessarily have to do with short stories, but I was wondering — is it like a record, where the sequencing of tracks matters, like it’s meant to be read in the order the stories are in the book? FF:  Yeah, definitely. When I was writing the book, it was very important to me that all the stories were different, and that’s why the last story is very long and disjointed, like a long avant-grade song like “European Son’” at the end of that Velvet Underground record, I think that record is just 11 songs and the last one is, for me, the weirdest on the whole record. So I kept that in mind, how records can be really diverse in terms of genre, like “London Calling,” or like a jazz record, like a Charles Mingus record… different moods, you know, that was important to me.

FF: (laughing) Yeah, perhaps, perhaps… It was interesting to put cameos in these stories, people I’ve known as well as artistic figures, people like the ghost of Bill Haley, Leonora Carrington is the most obvious one, T. Boone Pickens is in there somewhere.

NS: I especially loved “The Performances of Liliana Krauze” – it’s a very high-relief portrait of a woman, and it made me wonder how much of these stories are based on real life, are these people that you knew at one point?

FF: Less than you would think — all the stories are pretty much fiction, you know, I never really based anybody on a real person. If there’s any real figures in it they’re all pretty peripheral, they’re just shadows of real people. The Liliana Krauze story is really important to me — I woke up one day after having a dream about Leonora Carrington in like 2011, and I wrote the introduction to the story,  and then two months later she died. I realized that I needed to do something with this introduction, like, “Who is this person? Why did I write this?” I think I had come across her before in an interview with the filmmaker Jodorowsky or something, and I knew her art and I knew a few of her stories, and after that I just became obsessed with her. So I just chased that story down. That’s one of the only stories that I wrote in shorthand, sitting in the same spot at Thunderbird on the east side, just pages and pages until it was done.

NS: What’s the significance of the title?

FF: When I first started writing the stories, I was so bored with everything I had done, I was thinking, “Why would anybody want to publish this,” you know, so when I would finish a story I would yell “Death to the bullshit artists of South Texas,” I really don’t know why. It’s just a transgressive thing, like putting all your old shit behind you, that maybe helped you become better in some kind of way at the time, but then one day you write something and you’re like, “My god. I’m leaving all my old shit behind.” Like, how can the Beatles go back to playing Chuck Berry songs after they record “Sergeant Pepper”? It feels to me like all these characters achieve that transgressive force that the title phrase represents, some moment of greatness even if they don’t go on to be very well known. It was also inspired by rock and roll, like those Penelope Spheeris documentaries like “We Sold Our Souls For Rock and Roll” and “The Decline of Western Civilization,” long titles like that. You mentioned Bolaño earlier, and he does tend to write about the writers in his life, like everybody’s a writer and they’re all tragic, something happens to them –

NS: Right, that’s the thing that always attracted me to him – he makes writers seem so important.

FF: Totally. Even on a minor level, it matters, even a local music scene, people who put out records and stuff.

NS: What poets do you love, and what fiction is close to your heart?

FF: Things I discovered in my thirties that I never thought I would ever get into, like “Wuthering Heights” by Emily Bronte… I’m able to read things like that, what you would call realism, and see the shit that’s fucking weird in it. For example, this character named Joseph walks in in the beginning and puts a bunch of dead cats on a chair. There’s a regular scene going on while it’s happening, it’s really weird. I also love Pierre Reverdy —

FF: He’s great, I love the little blue NYRB book of his, and really obvious shit like Rimbaud, I love Rimbaud. I also love Alejandra Pizarnik from Buenos Aires, her poetry is just devastating. There’s nobody really quite like her in the 20th Century, in my opinion. Stuff from between the wars, Alfred Doblin. I try to read as much diverse stuff as possible, I’m not one of those people that gets behind one writer. I try to shake it up, and I’m always changing. If you asked me the same question tomorrow I’d say something different.

NS: You were born in Mexico, and you moved here early on — what was that like and how did it inform your writing?

FF: I don’t know…the same way (growing up in Mississippi) would influence a writer from Mississippi I guess? I had never written directly about the border or anything like that, approaching something through brutal realism never really interested me as writer, you know? If there’s anything political in any of these stories, it just appeared. I’m sure there is — I know there is — but none of it is me trying to smuggle in any political stuff, it’s just part of the reality of the stories.

NS: How did you end up in Austin? How do you feel about it? Why do you live here?

FF: I didn’t see a solution for myself in the Valley, so I left. I rented a room and got a job as a dishwasher in a pizza joint, and I wrote. I moved up here with my duffle bag and a typewriter, and I didn’t have a lot of friends. So that’s literally all I did: work, come home, and write my stories.

FF: I do; the week I moved here was the week Randy ‘Biscuit’ Turner died —

FF: Me too! That was the first cover I saw upon moving. But yeah, I like this town. It’s super hard to be a musician here, you know? You have to work really hard. My musician friends work hard and I tried to feed off that energy as a writer throughout the years. I’ve met so many talented people here that have changed me. I’m almost scared to go to shows now, though, because whenever I see an amazing band, my first instinct is just to be afraid for them, because I don’t want them to break up…There’s so much great music. If the literature scene here was like that, people would lose their minds…

NS: What’s on the horizon? What’s this new book, “Tears of the Trufflepig,” that comes out next year?

FF: It’s totally different, it’s an alternate reality border story about a widower looking for his brother, who was kidnapped by a headhunting syndicate. There’s two border walls and a third border wall being created. Drugs are legalized, after a food shortage in the world… Anyway, it’s really different from these stories. I get really bored sticking with one thing, and I really want to challenge myself always. Otherwise I’m not having fun, you know?

Nathan Singletonhttp://thesideshowtragedy.com
Nathan Singleton is a writer and musician living in Austin, Texas. "The View From Nowhere, "his most recent record as one half of the avant-blues duo The Sideshow Tragedy, is available in Europe on Dixiefrog Records. He is a regular contributor to Kirkus Reviews and Pyragraph.com.