Everybody into the Pool 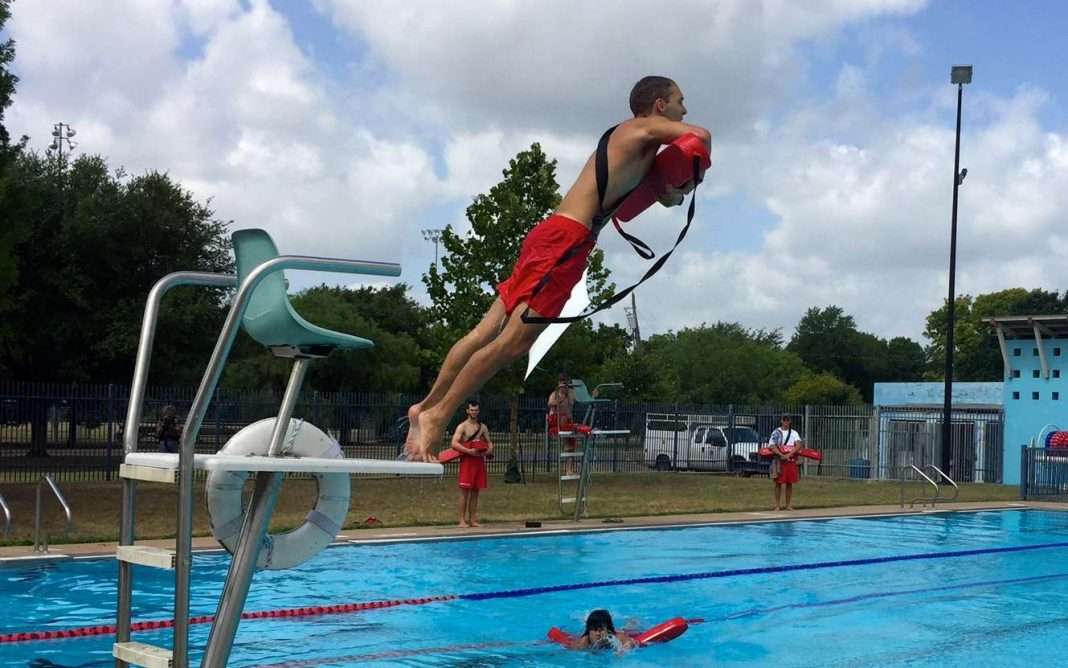 On a recent weekday morning, choreographer Allison Orr stands poolside in a Southeast Austin park and offers direction to some of the performers who will be in her next dance work, “Dove Springs Swims.”

“The pool is our stage,” Orr says to the group. “We’re showing the day in the life of this pool. You’ll start the show by strolling around the pool — like a paseo, like we’re strolling around a plaza. We’re out to see and to be seen.”

The 10 or so women gathered around Orr are from the surrounding Dove Springs neighborhood. They came to the project over the course of the last year as the Forklift team embedded themselves in the community, attending meetings of neighborhood groups and holding town hall gatherings and potluck suppers at the recreation center.

“We worked hard to get this pool and this park here,” says Dana Koutee, a special education teacher who has raised her children in the Dove Springs neighborhood. “We need to get more people from the neighborhood out here.”

Before Orr signals to assistant to cue up the music, she repeats her directions in fluent Spanish so that all of the assembled participants can understand.

Everybody into the pool

“Dove Springs Swims” is the second in “My Park, My Pool, My City,” a trilogy of community-based dance works. The city of Austin’s Aquatics Division invited Orr and her Forklift Danceworks company to be in residency for three years, a project designed to bring attention Austin’s aging public pools and their severe infrastructure crisis.

Last year, Forklift staged “Bartholomew Swims” a celebration of a rare success story in city’s troubled poolscape. Plagued with cracks in its foundation, Bartholomew Pool in Northeast Austin was renovated after a five-year closure. And like they will with “Dove Springs Swims,” Orr and Krissy Marty, Forklift’s associate choreographer, made the Bartholomew dance with and involving neighborhood residents, pool lifeguards, aquatic department maintenance staff and the Bartholomew swim team.

Most of Austin’s public pools were built between 1927 and 1990, with an average age of over 50 years. Many have near-antique pumps or cracks in their foundations. Many areas of the city are not served or are underserved. With very little in maintenance coming from the city’s regular budget funding, the Austin city council six years ago began the process to shore up the pools. In February the city issued its first ever Aquatics Master Plan. Capital costs for aquatic improvements are estimated in the range of $152 to $193 million.  The master plan calls for $124 million aquatics-only bond on the November election.

Austin’s public pool dilemma is hugely complicated by issues of economic class, racial privilege and the legacy of segregation. While the city’s wealthier residents can choose to use private pools, the city’s poorer residents have few or no options for swimming when public pools are either closed or under-resourced — or no pool exists in their neighborhood in the first place.

With its 1970s single-story rental homes and duplexes Dove Springs is a majority Latinx and Black neighborhood and one of Austin’s poorest. Many in the neighborhood don’t know how to swim. Others fear water, traumatized from the repeated flooding of Onion Creek, which defines the southern edge of the neighborhood. The city’s largest watershed, Onion Creek flooded in 1998 and again in 2013, damaging hundreds of homes, many of which the city has bought out and demolished.

“We have some participants who won’t be getting in the pool,” explains Krissie Marty, Forklift’s associate choreographer.

Since 2001 Orr, who has B.A. in anthropology and an M.F.A. in dance, has made large-scale dances for people who aren’t traditionally considered dancers — municipal sanitation workers, institutional food service workers, Goodwill warehouse employees. Her methodology starts with a commitment to an admirably long artistic and ethnographic residency of sorts within a community. Orr and her team easily spend up to a year embedding themselves with the workers and communities around which a performance is centered.

Forklift’s breakout piece, as it were, was 2009’s “The Trash Project.” Staged on the last remaining strip of runway tarmac at the old Mueller airport, with its original score by Graham Reynolds,  “The Trash Project” was a breathtaking performance of more than two dozen sanitation works, their trucks, trash cans and heavy equipment. The show was restaged in 2011 for an audience of 6,000. A documentary film on the project, made by Andrew Garrison, screened at festivals internationally. (Reynolds remains Orr’s regular musical collaborator and has composed the score for “Dove Springs Swims.)

“Work like this is not fast,” says Orr, who notes that she typically interviews up to 100 people in the development of a single dancework. “It takes time and it takes constantly asking those you’re working with ‘are we doing it right?’ Whenever I start a new piece, I listen for the story the people we’re working want to share. It’s their story, not ours.”

“To make (art) that’s truly a community collaboration and that’s truly accessible, it can’t be art that’s about you. You have to be radically flexible and always open to change what you’re doing.”

Forklift dances are presented in large-scale public settings — places that are certainly atypical for the majority of arts programming and even atypical for adventurous art that’s described as site-specific.

Forklift shows are free. And the economic, cultural and age diversity of the Forklift audience is radically atypical compared to audiences at established arts institutions that are not culturally specific in origin.

Before establishing her own company, Orr worked with groundbreaking choreographer Liz Lerman and Lerman’s Dance Exchange company. In the 1970s, Lerman began profoundly challenging the traditional dance-making hegemony by posing the question, “Who gets to dance?” Lerman, the recipient of Macarthur Foundation “genius” grant, activated a wide range of populations including senior citizens, clergy members and classical musicians. Forklift associate choreographer Marty spent more than a decade as a faculty member and choreographer with the Lerman’s Dance Exchange.

“Opening up your artistic process to actually include different publics is not easy,” says Orr. “You have to be willing to give up a certain level of control over your art. Not every artist can or wants to do that.”

Since the 2016 presidential election, seemingly artists of every discipline and arts institutions of all kinds have escalated their efforts to position what they do —present exhibitions, make art work, give concerts or performances, offer programs — within the framework of social justice issues. Now, so much arts programming is framed, or at least described and promoted, as addressing racial, cultural and gender equality.

Of course correctives to the cultural landscape are urgently needed; Equity, diversity and inclusion in the arts, in this country and elsewhere, is an absolute imperative. But while the language coming from most arts institutions buzzes with words like “diversity,” “community” and “inclusion,” how many of those organization that are not culturally-specific in origin have really diversified what they do and truly included new audiences? And how many individual artists truly have a practice that involves or connects with publics different from themselves?

True inclusion means surrendering some artistic authority. It can also mean creating something that unabashedly trades on emotions rather than the heady conceptualism that’s crafted for only a few to understand. And none of that is easy for an arts world that — however liberal its veneer — ultimately equates artistic excellence with exclusivity. What’s still prized by the cultural establishment is the art work and the performance piece that obfuscates its own meaning and buries its emotion.

While Forklift’s model of truly inclusive art-making has garnered enthusiastic local and national response — mostly recently Orr won a prestigious $50,000 award from United States Artists — the choreographer still faces criticism from her dance peers as well as other artists.

“People equate art that’s accessible as art that doesn’t have any level of excellence. Or they’ll say that what we do isn’t really dance,” says Orr. “But what artist doesn’t want everything they create to be artistically excellent? Excellence drives every piece we’re create.”

A passel of teenage girls have joined the group of women poolside. The girls’ in-pool performance involves big, colorful inflatable animals, but at the moment, Orr and Marty are convening everyone to practice the group jump into the pool, the finale of the paseo.

“How many of you are joining us tomorrow morning for the block walking?” Orr asks the group.

Just as community organizers do, Forklift volunteers and performers plan a Saturday morning going door-to-door in the Dove Springs neighborhood, knocking on doors in order to personally invite people to the show. Volunteers will also offer people voter registration forms and information about swimming programs and recreation center activities.

“We’ve encouraged our donors and regular supporters to come to the preview night performance so we can make room on the regular show nights for neighborhood folks,” she says.

“We’ve been spreading the word about the show since we started working on it, but it’s often confusing for people to understand what we do — that we’re performing a show, with live music, and the show is at the pool. And we wanted to invite people personally. It’s their pool, it’s their neighborhood.”

Leash up: Forklift Danceworks revives ‘Dances for Dogs and People Who Walk Them’